Encephalopathy is a term that refers to brain dysfunction, for which there are many causes. Hepatic encephalopathy (HE) occurs when the liver stops working properly or when blood from the gut bypasses the liver in what is known as portosystemic shunting. HE can manifest as a spectrum of neurological and psychiatric abnormalities.

The liver has several functions, including detoxifying the blood, producing bile, storing energy, and metabolizing various compounds. Ammonia is produced in the gastrointestinal tract by bacterial degradation of nutrients, and also through normal metabolic processes in intestinal cells. Normally, the liver breaks down ammonia into urea, which is safely excreted in urine. Although exactly how HE develops is complex and remains incompletely understood, an important factor is loss of the liver’s ability to detoxify ammonia, which instead travels through the blood stream and reaches the brain. Physicians think that excessive ammonia and other toxins play a central role in the debilitating symptoms of encephalopathy, which may range from subtle personality changes to confusion and even coma.

There are three main types of hepatic encephalopathy, defined by the underlying condition.

Type A is the result of acute liver failure, which occurs when a patient experiences rapid deterioration in liver function. This deterioration may be caused by numerous conditions including but not limited to drugs, medications, viral infection, or autoimmune disease.

Type B occurs in the setting of portosystemic shunting or bypass. In this condition, the circulatory system bypasses the liver, typically the result of either a congenital abnormality or of surgery.

Type C is the result of cirrhosis. Individuals with chronic liver disease from viral hepatitis (such as hepatitis B or C), non-alcoholic fatty liver disease, alcohol, autoimmune hepatitis, or another cause, may be at risk of developing cirrhosis. Cirrhosis refers to a specific pattern and extent of scar tissue in the liver, reflective of advanced disease. This tends to develop gradually, with scar tissue slowly replacing healthy tissue over a period of time.

Often, a precipitating factor plays a role in an episode of HE, such as infection, gastrointestinal bleeding, diuretic overdose, electrolyte disorders, dehydration, or constipation. 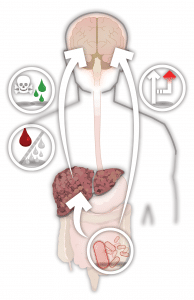 Physicians typically use the West Haven Criteria to grade severity of HE.

One important physical examination sign in HE is asterixis, which is a flapping tremor of the hands typically elicited when the arms are outstretched and wrists extended. This sign is typically reflective of grade 2 encephalopathy or higher.

As HE most often occurs as a complication of liver failure, there may be other symptoms present, reflective of the underlying severity of liver disease, such as yellow discolouration of skin (jaundice) and/or eyes (scleral icterus), and fluid accumulation in the abdomen (ascites).

The prevalence of covert HE in cirrhotic populations may be quite high, although since the symptoms and signs are subtle and may require special testing to diagnose, the true prevalence is likely under-appreciated in the typical clinical setting. Within the first 5 years following the diagnosis of cirrhosis, the risk of experiencing a first bout of overt HE is 5-25%. Once a first episode has occurred, there is a 40% chance of experiencing a recurrent event within 1 year. Those with recurrent bouts of OHE have a 40% chance of experiencing another recurrent event within 6 months.

The diagnosis of hepatic encephalopathy is a clinical one, which your health care provider will make on the basis of history, physical examination, and possibly with the aid of laboratory testing and/or special cognitive testing. Early identification and presentation for medical attention is the most important first step. Input from family members or close friends is often beneficial in identifying subtle changes that might lead to the diagnosis, and also might assist in assessing response to management strategies.

Additional testing is often performed to further investigate a potential precipitant. Blood ammonia levels are commonly elevated in individuals with cirrhosis even in the absence of HE, meaning that a high ammonia level is rarely of diagnostic utility. However, a low blood ammonia result in someone suspected to have HE may prompt the clinician to consider an alternative diagnosis.

While once considered appropriate in the management of HE, it is now understood that dietary protein restriction is not recommended. A detailed assessment of nutrition status with specific recommendations based on individual circumstances is often warranted, and should be discussed with your health care provider.

Avoidance of all alcohol, if not already achieved, is of utmost importance. All medications, including but not limited to over the counter agents that may have a sedative effect, should be reviewed by your health care provider.

An individual diagnosed with or suspected to be experiencing HE should not operate a motor vehicle or heavy machinery.

Lactulose, a non-absorbable sugar (disaccharide), remains the most common, effective treatment for OHE. Taken in liquid form, its beneficial effects occur by lowering pH in the gastrointestinal tract and altering gut flora. Due to its laxative affect, patients will need to adjust the amount consumed to achieve 2-3 soft bowel movements per day. Side effects might include nausea, bloating, abdominal discomfort, diarrhea, and dehydration.

Rifaximin (Zaxine®) is a poorly-absorbed oral antibiotic that acts mostly on bacteria in the gastrointestinal tract, thereby exerting its effect where needed. It is used as additive therapy in combination with lactulose when recurrent episodes of OHE occur with lactulose alone. It may also be a suitable alternative for those that are intolerant to lactulose due to side effects, as rifaximin is typically quite well tolerated.

While lactulose and rifaximin are by far the most commonly used and well-studied agents to treat OHE, other agents have been studied including branched-chain amino acids (BCAAs), L-ornithine L-aspartate (LOLA), probiotics, and other antibiotics.

Once a first episode of OHE is diagnosed and adequately treated, ongoing therapy as described above is typically indicated to prevent recurrence.

Since the cause of HE is typically either chronic or acute liver failure, when non-responsive to medical therapy, or when recurrent episodes occur despite maximal medical therapy, evaluation for liver transplant may be appropriate.

Hepatic encephalopathy is a serious condition that might be a recurrent cause of severe disability, with symptoms ranging from mild sleep disturbance to confusion, disorientation, and even coma. Early identification is key, as it allows for expeditious identification and management of any precipitating factors. If you or a loved one have cirrhosis and experience any symptoms of hepatic encephalopathy, as discussed above, we encourage you to speak with your physician as soon as possible.

First published in the Inside Tract® newsletter issue 200 – 2016