To make a donation to the GI Society in memory of Dr. Anderson, please click here.

We are saddened to announce the passing of Dr. Frank H. Anderson on April 1, 2019, just ten days short of his 81st birthday. Dr. Anderson dedicated his career to making the world a better place for individuals with digestive and liver diseases and disorders.

In 1976, he co-founded the Canadian Society of Intestinal Research (at the time called the Northwestern Society of Intestinal Research) as a means to encourage more research on the taboo topic of gastrointestinal disease so that people wouldn’t have to suffer or die as a result of their conditions. He was also the first chair of our Medical Advisory Council and co-founder of the Gastrointestinal Society in 2008. He mentored many students through the gastroenterology program at the University of British Columbia. 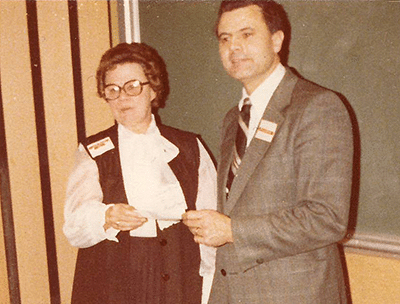 Doris Raeside and Dr. Frank Anderson in 1976 accepting a donation for CSIR.

Throughout his life, he focused on empowering patients and helping them to better understand what it meant to be diagnosed with a digestive disease or disorder and was an early leader in study of the liver. He wrote our first ever pamphlets on Inflammatory Bowel Disease, Functional Bowel Disease (now known as Irritable Bowel Syndrome), Hepatitis, Intestinal Gas, Hiatus Hernia, and Ulcer Disease in 1976. At that time, patient information like this was basically unheard of, with most patients only learning about their disease through the scarce minutes they had at doctors’ appointments. 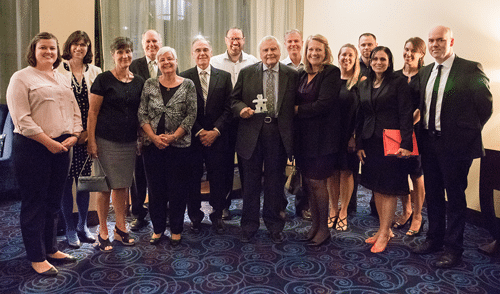 Dr. Anderson with his family and friends at the Inside Affair in 2017.

During our Inside Affair in 2017, we honoured Dr. Anderson’s achievements and contributions to the two charities he loved. In the video below, Dr. Anderson talks about the history of CSIR and the GI Society.