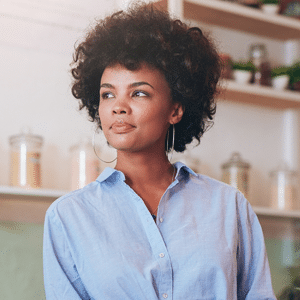 The word ‘gastro’ refers to the stomach, and the word ‘paresis’ means partial paralysis, so gastroparesis means partial paralysis of the stomach.To understand what goes wrong in gastroparesis, it is important to know how a healthy digestive tract functions. When we eat, we start by chewing and swallowing (ingesting), which requires conscious effort. Once the food reaches the esophagus, an automatic, rhythmic motion (peristalsis) takes over, propelling the contents all the way through the digestive tract. Typically, the passage of food from one area of the digestive tract to the next is precisely coordinated, so that food stays in each area just the right amount of time. For the stomach, this is approximately two hours.

However, in those with gastroparesis, the food does not move from the stomach into the intestine as quickly as it should (delayed gastric emptying). Gastroparesis is a motility disorder, which means there is no physical obstruction preventing timely digestion, but rather difficulty regulating muscular activity. It occurs when the pair of nerves that connects the brainstem to the gastrointestinal tract (vagus nerve) is damaged or not functioning properly. Since the vagus nerve is unable to send the necessary messages to ensure that the muscles in the stomach continue to work normally, food remains in the stomach for too long, leading to symptoms. 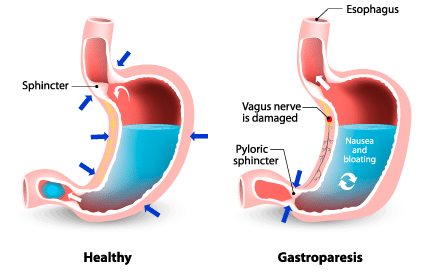 The most common cause of gastroparesis is diabetes mellitus type 1 or type 2. High levels of glucose in the blood can cause chemical changes to the vagus nerve. This type of gastroparesis can be especially dangerous, because the delayed gastric emptying leads to more intense blood sugar spikes in those with diabetes, causing a cycle of blood sugar highs and lows that continues to affect the vagus nerve.

Gastroparesis is typically associated with some form of damage to the vagus nerve, which can occur in a range of situations, including from various mineral deficiencies, eating disorders, opioid medications, certain antidepressants, and surgeries in the upper gastrointestinal tract, such as gastrectomy or bariatric surgery. Other causes of gastroparesis, although very rare, include connective tissue diseases such as scleroderma and Ehlers-Danlos syndrome, and neurological conditions such as Parkinson’s disease. In about a third of cases, the cause of gastroparesis is unknown (idiopathic). In some cases, such as those caused by certain medications or eating disorders, the gastroparesis can be temporary, with normal digestion function returning upon medication adjustment or adapting to healthy eating habits.

Gastroparesis affects approximately 4% of the population and is more common in women. Many people with gastroparesis also have diabetes, and 50% of those affected had diabetes before the onset of their gastroparesis.

The most common symptoms of gastroparesis include feeling full from small amounts of food, nausea, vomiting, reduced appetite, abdominal pain, heartburn or gastroesophageal reflux disease (GERD), and regurgitation. These symptoms can lead to weight loss and nutrient deficiencies. Other symptoms include bloating, muscle weakness, and night sweats. Since the digestive system doesn’t work smoothly, sufferers also experience periods of low blood sugar while the food remains in the stomach, and high blood sugar when it eventually reaches the intestines.

Sometimes, more severe complications can occur due to delayed gastric emptying. Individuals can experience obstructions caused by masses of solid hardened food (bezoars). Often, bezoars will pass on their own, but other times they require treatment in the form of oral solutions to help dissolve them or surgery, in severe cases.

If excessive vomiting is a symptom, it can cause its own set of complications, including dehydration and malnutrition. In those who have diabetes and gastroparesis, controlling blood sugar can become very difficult due to the sudden spike of sugars when food finally passes into the small intestine.

Your physician will review your symptoms and medical history and complete a physical examination, including blood tests. If he or she finds it likely that you have gastroparesis or is unsure and wants to rule out other diseases and disorders, there are a few tests available. This is especially important with gastroparesis, because many of the symptoms are similar to other disorders, such as functional dyspepsia.

Gastric emptying scans allow your health care team to measure the speed at which you digest food. For this test, you consume a tiny amount of radioactive material with a small meal, which allows technicians to monitor the rate at which it passes through your digestive system by periodically using a camera to check where the radioactive meal is. If it stays in the stomach for too long, then it can indicate gastroparesis.

An upper gastrointestinal series involves consuming a barium drink in front of an x-ray machine after fasting. The barium is a chalky liquid that shows up on x-rays, allowing the technicians to see details in the gastrointestinal tract. This can help them find any anomalies in stomach function.

Gastroscopy involves a physician using a small, flexible tube with a camera and a light (endoscope) to look at the upper parts of the digestive system, including the esophagus, stomach, and duodenum. This test is helpful to detect bezoars or other signs of gastroparesis.

Abdominal ultrasound is useful for identifying if there are any other physical abnormalities that might be causing symptoms other than gastroparesis.

Gastric or duodenal manometry is a long thin tube that measures muscle strength and patterns within the esophagus and through the lower esophageal sphincter into the stomach.

The management of gastroparesis can include simple dietary changes, medications, and even surgery depending on the disease severity.

In individuals with mild gastroparesis, a few changes to dietary habits can largely reduce symptoms. Most of these changes focus on reducing the amount of food you eat at once, because overeating makes it even more difficult for your stomach to empty. Consuming smaller meals more frequently, rather than two or three large meals, can help. You may also find relief by eating mostly soft or liquid foods, such as soups and smoothies. Chewing each bite very well and consuming non-fizzy liquids with meals can also make digestion easier. Avoiding or limiting high fibre and high fat foods can reduce discomfort, since these foods typically take longer to digest. For some individuals, supplemental nutrition beverages can help ensure adequate nutrient intake.

If you have diabetes, make sure to keep glucose tablets or hard candies on hand. You can use them to raise your blood sugar, because they are easily absorbed, if gastroparesis is causing low blood sugar. A registered dietitian can offer advice if you are unsure what to eat so that you meet your nutrition requirements when you have gastroparesis.

The medications available for gastroparesis don’t treat the underlying disease, but they help to alleviate symptoms. There are two primary medication types available:

Motility agents increase the speed of peristalsis, causing the stomach to empty more quickly, and include metoclopramide (Reglan®, Maxeran®) and domperidone (Motilium®). Another drug, cisapride, is available through Health Canada’s Special Access Programme or directly from its generic manufacturer, Apotex Inc.

Antiemetics reduce nausea and vomiting, and include medicines such as prochlorperazine and promethazine.

For those who are unable to get symptoms under control through dietary changes and medications, there are a few surgical options that may offer relief.

A gastric electric stimulator is an implanted device that uses mild, controlled electrical pulses to stimulate the smooth muscles in the digestive tract and speed up gastric emptying. However, this treatment does not work for everyone, and is not available in all areas.

A feeding tube surgically attached at the entry to the small intestine can offer a last resort for patients who are completely unable to take nutrients in to the stomach in either solid or liquid form.

Gastroparesis is typically a chronic condition with potentially dangerous side effects. For some individuals, being more careful about the frequency and types of foods they consume is enough to live a relatively normal life, but for others, ongoing medications and even surgery might be necessary. Quality of life is regularly diminished with gastroparesis. Those who have both diabetes and gastroparesis need to be especially diligent.