Heartburn Keeping You Up at Night?

Trying sleeping on your left side!

When you are standing, or sitting upright, gravity helps prevent stomach contents from rising up into the esophagus. However, reflux can become much worse while you are sleeping or lying in bed; without the aid of gravity, it is much easier for stomach contents to spill through the malfunctioning LES and flow into the esophagus. This leads to an increase in symptoms, such as a burning in the chest, the feeling of food or liquid rising into the mouth, a sour or bitter taste, a sore throat, and coughing, which can make getting a good night’s sleep a difficult task. 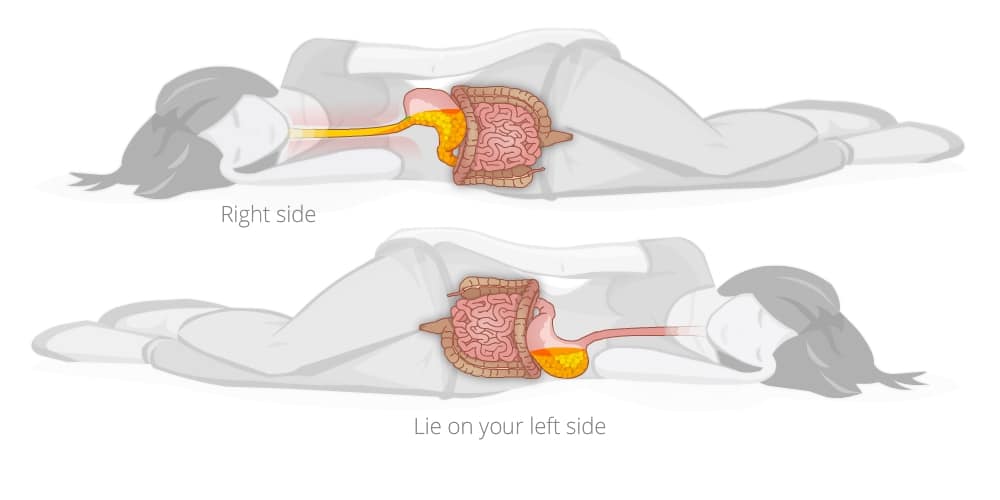 This effect is much worse when sleeping on the right side of your body (see top picture) or on your back. To understand why, look to the shape of the upper gastrointestinal tract. The esophagus is located in the centre of your body, but the stomach is a curved organ with the majority of its volume in the left side of the upper abdomen. This means that the position of your body can have a large influence on the degree of reflux you experience. Due to gravity, the shape of the stomach, and the angle of the connection between it and the esophagus, sleeping on your left side can greatly reduce reflux (see bottom picture).

Another way to use gravity to help decrease nighttime GERD symptoms involves propping up the head section of the bed by about six inches. Make sure you achieve this elevation by raising the right section of your bed, not by stacking up the pillows, which can lead to back or neck pain and could increase pressure on the stomach and actually increase GERD symptoms.

First published in the Inside Tract® newsletter issue 201 – 2017