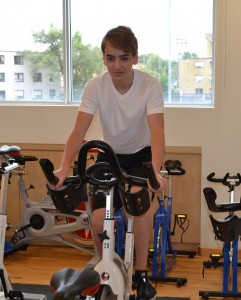 I was halfway through grade 7 when I started suffering from frequent sharp abdominal pain, much like appendicitis pain, which caused me to miss many days of school. When I started my journey of finding a diagnosis at Rouge Valley Hospital in Toronto, I was for the most part living the life of a regular 12-year-old kid. I wasn’t worrying about what I ate or how painful my day would be. That didn’t start until later. For 8 months, I went through a huge amount of tests including endoscopies, colonoscopies, MRIs, MREs, ultrasounds and a dozen blood tests. I was transferred in early 2013 to the “Disney World of Hospitals” Sick Kids in Toronto.

At Sick Kids, I was diagnosed with a rare chronic disease called eosinophilic gastrointestinal disease, which was a bittersweet result. I finally had a diagnosis but learned that there were few treatment options and very little research. My abdominal pain was apparently caused by a high number of white blood cells, called eosinophils (e-o-sin-o-fils), accumulating in my body, which are likely linked to my long list of food allergies. At the beginning, I was very angry. I was thinking, “I went through all of this just to be taking a medicine which tasted so awful even Brussels sprouts would have tasted better.” Thirty minutes before a meal, I needed to mix then swallow a mixture of medication that included five packages of artificial sweetener. During that point, I was the lowest I had ever been, physically and mentally. It was not just because of the pain, it was how isolating it was. I was pretty much secluded from everyone but my close family. I tried to go to school for 3 periods a week (each period is 45 minutes) but also needed to enrol in the Toronto School Board’s home instruction program so I didn’t fail. It was very hard for me to live with no social life. I was always a social kid and loved getting together with friends, but it’s hard to do that when you are off the radar. I couldn’t really talk about anything with my friends because I couldn’t keep up with the news from school. I was at the end of a very, very, very, long broken telephone.

But leading into high school, the medication started to help, and I was determined to change and re-integrate back into society. It was hard at first. A lot of people had questions about where I was for a whole year, and although I was honest most of the time it was hard being up front. I was worried that I would have been seen as a freak for being sick, and I worried that telling people about my illness would make them depressed and not want to talk to me. It turns out that the media representation of teenagers as immature brats isn’t very accurate, as I wasn’t shunned like I thought I would’ve been.

As I write this going into grade 11, I have a great group of friends, who help me take my mind off the pain, and is one of the two catalysts for me having this tale of triumph to tell. The second catalyst is exercise.

During my lowest point, I would spend a large portion of my day in my basement or in my room, with the lights off, playing video games or watching TV and YouTube. I depended on these distractions to help my pain, like an alcoholic depends on alcohol to numb their pain. I agree that distractions can be helpful. In fact, the only reason why I could breathe without hyperventilating during my worst pain moment was because of NHL 12, an ice hockey video game, but it is unhealthy and unrealistic to have to depend on that to not feel pain.

I decided that enough was enough, and I was tired of feeling sorry for myself, so I hit the gym. I chose a program that had a rewarding linear progress and gave me back the confidence I had lost. Getting regular exercise allowed me to be able to get my social life back, feel better about myself, and help my pain. If there is someone with my kind of situation out there, the things I would recommend are exercise, and trying to find people who make you enjoy life, because the benefits of being physically and mentally fit had more of an impact on me than anything else.

First published in the Inside Tract® newsletter issue 195 – 2015