One of a Kind: Patty Emry’s Story

Parents often tell their children that they are special and unique. Patty Emry has been hearing this throughout her life – but usually from surgeons. Born as a twin in 1950, some of Patty’s organs had not formed fully, including parts of her digestive and reproductive systems. The hospital staff told her parents she would die, probably within a few days. Despite the odds and years of surgical corrections and complications, Patty not only lived – she has thrived. Sadly, her twin died shortly after birth.

Patty was born with a partial colon, but no rectum and no anal opening (imperforate anus). She had two sets of reproductive organs, but these were also incomplete and she had neither vaginal nor urethral openings. Patty underwent her first surgery at just two days old. The surgeons brought her intestines and other systems down near where they should have been and created appropriate openings. Even if she lived, they told her parents, she would require many more surgeries as her body grew, and she would need to endure time-consuming daily medical procedures (especially enemas to allow for elimination of bowel contents) for her entire life.

The surgeons were right about the struggles she would endure, but Patty’s life has included much more than they could possibly have predicted.

For most of her life, Patty worked to hide her ailments. She says, “I fooled everyone, even myself, into thinking I was healthy and normal. More than that – I was an athlete!” Sports gave her a sense of control over her body.

As a young woman, she went to her physician for advice on how to manage her physical challenges, which sometimes included extreme hemorrhaging, while training for an upcoming marathon. He told her, “Patty, I’m sorry but you are not well enough to be running marathons. They are not for you.”

“And you’re ok?” he gasped, unbelieving.

She has been a competitive skier, marathon runner, ski instructor, physical education teacher, coach, and athletics director. After adopting two children, she surprised herself, her husband, and the medical community once again by becoming pregnant. She has now been married for more than 40 years. 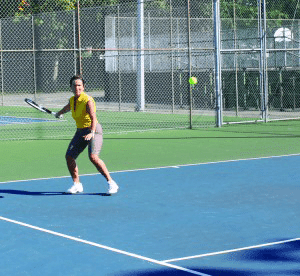 Patty is adding writing to her accomplishments, putting together a memoir detailing her incredible life and medical history, which she calls, It Takes a Sense of Humour: A Patient’s Journey.

Like many individuals who live with a chronic digestive condition, Patty has a special appreciation for the human body. For decades, she pushed young athletes to perform while keeping her own physical struggles a secret. She would say to them, “If you were given a healthy body, you should take care of it and keep an active lifestyle. Enjoy what you have and USE it!”

Patty says that revealing her medical situation to others is risky. “You can’t predict how someone will react,” she says. Some people have responded with confusion or outright rejection. Most of the time, telling her story has come with great rewards. She is still involved with athletics, but she no longer uses it to hide or deny her physical condition, but to celebrate life’s gift. “If we are lucky enough to have passions,” she says, “we owe it to ourselves to pursue them.”

Patty has spent her life trying to answer the question, “Who is Patty – aside from a unique medical problem to fascinate surgeons?” The answer, she has found, is a talented athlete, revered coach, wife, mother, public speaker, writer and, like all of us, so much more than a diagnosis. Patty knows that not everyone has the same support system that she has had and that many people live with even more debilitating conditions. She hopes her book, once finished, will be a source of support for others.

Editor’s Note: Patty Emry and her family have been long-time supporters of the Canadian Society of Intestinal Research. Patty, her mom and dad (George O’Leary was a CSIR Board member for many years), husband and son, have all have played in our Golf Marathon, raising thousands for medical research.

First published in the Inside Tract® newsletter issue 186 – 2013