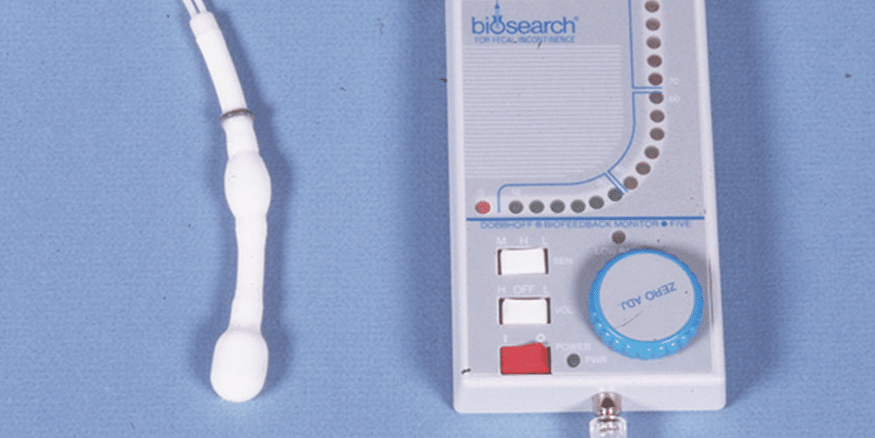 Better than drugs, biofeedback may work along with improved dietary choices to alleviate chronic constipation, especially for a common specific sub-type called dyssynergic defecation. The essential body function of having a bowel movement should be as instinctive as breathing; however, some people struggle with this process.

The normal range for bowel movement frequency is from three per day to three per week. Generally, chronic constipation is having fewer than three bowel movements per week on a regular basis. Excessive straining, incomplete evacuation, and hard stools usually accompany the infrequent movements. Many people experience constipation from time to time, but chronic (ongoing, unrelenting) constipation affects between 12-19% of the population. (Click here for Rome III diagnostic criteria.)

There are three classifications of chronic constipation, with some overlap:

Slow Transit Constipation is when the bowel contents move along through the digestive tract too slowly, allowing too much water to be drawn out, resulting in firmer stools, and

Irritable Bowel Syndrome With Constipation (IBS-C) is when constipation is the predominant symptom among the classic IBS symptoms of abdominal pain, bloating, diarrhea, constipation, or alternating between diarrhea and constipation.

Increasing both dietary fibre and fluid intake are essential to help reduce constipation. Medical treatment of chronic constipation often includes traditional laxatives but a recent study showed that only 53% of patients were satisfied with results from these medications.

A study from the University of Iowa published in the March 2007 issue of the journal Clinical Gastroenterology and Hepatology builds on some earlier research to demonstrate clearly the benefits of biofeedback when compared with standard therapy and sham feedback.

Biofeedback Treatment: In addition to the Standard Treatment, subjects had an initial training session by a nurse specialist followed by up to a maximum of 6 biweekly, 1-hour biofeedback sessions, during a 3-month period. Biofeedback training involved a probe inserted into the anus while the patient monitored their muscle activity on a computer screen. The goal of rectoanal coordination was to increase the pushing effort – as reflected back to the subject by the computer display – with synchronized relaxation of the anal sphincter. The therapists monitored the patients’ breathing techniques and provided appropriate advice and feedback to improve the defecatory effort. Patients also received sensory conditioning by repeated inflations and deflations of a rectal balloon.

Sham Feedback Treatment: In addition to the Standard Treatment, subjects participated in up to 6 biweekly, 1-hour relaxation sessions, during a 3-month period. At each session, to mimic the biofeedback treatment, a nurse placed a probe in the subject’s rectum but did not provide counselling to improve defecation. These subjects also underwent rectal balloon sensory conditioning.

In all, 77 participants (69 women and 8 men) participated, randomized to the three treatment groups. At 3 months, results were much better in the biofeedback treatment group than in the other two groups. For example, the number of complete spontaneous bowel movements showed a significantly greater increase in the active biofeedback group than in the sham or standard groups. In all, the dyssynergia pattern was corrected in 79% of subjects receiving biofeedback, 4% receiving sham, and 8.3% receiving standard therapy alone.

Of interest, a study done in 2005 with 52 subjects showed similar results. After 6 months, 71% of the patients with pelvic floor muscle dysfunction reported a satisfactory response. Follow-up after two years with these subjects showed that they were able to maintain the improvements gained.

Findings from these two studies emphasize the importance of neuromuscular conditioning for good bowel functioning, especially for those patients with pelvic floor dyssynergia.