Are the Coats on Your Pills the Right Fit for Your Gut?

Scientific breakthroughs lead to the creation of medicines, which are valuable tools for physicians in patient care. Medicines can make people well, ward off disease, and relieve pain, just to name a few things, but they may come in formulations that are not friendly to the gastrointestinal (GI) tract. Other times, the medicines need protection from the harsh stomach environment, which could damage or destroy them before they get a chance to work. Moreover, some drugs are unstable if left in their unaltered state. Overcoming these obstacles means that complex technical processing is required before medicine shows up on pharmacy shelves.

The challenge for medication manufacturers is to transform a valuable chemical or natural product into an effective and safe medicine for patient consumption. Medicines must get where they need to go to do their work, without harming other areas of the body. Tablets, capsules, liquids, powders, suspensions, injections, and enemas are some of the key delivery modes to get the medicines into our bodies so they can do their jobs. Varying the types of coating placed on tablets and capsules is a means of managing medication within the body.

Medication coatings serve many purposes; they provide colour to establish brand identity, mask bitter taste, supply a hard cover for crumbly or brittle compounds so a medicine does not dissolve in the mouth, and increase product shelf life. Coatings vary in consistency and formulation to allow immediate, delayed, or sustained release, and targeted release. 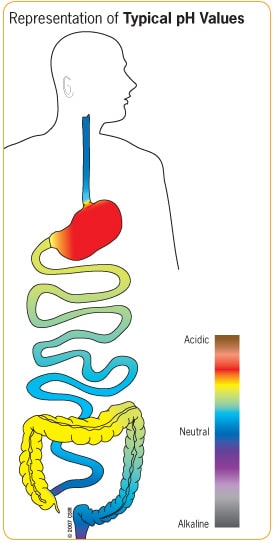 Various chemicals that need help getting past the stomach include those that are sensitive to moisture, degrade at different temperatures, stop working over time, are specifically vulnerable to gastric juices, or can cause damage to the stomach or other parts of the digestive tract.2

Enteric coating is valuable in placing a barrier over a medication to prevent it from dissolving until after it passes through the stomach. The word enteric means relating to, or being within the intestine. With an enteric coating, the medication releases depending on the pH value within the GI tract that initiates breakdown of the specific finish applied. The strategy of using pH as a trigger to achieve specific release of a product arises from the learning of pH variation along the GI tract.3

pH, the potential of hydrogen, is a measure of the activity of hydrogen ions in a solution, expressed within a range where acidic is less than 7, neutral is 7, and alkaline is greater than 7. Progressing through the GI tract, the pH values change substantially and specifically. While the exact pH within areas of the body can vary slightly from time to time and from person to person, refer to the adjacent diagram for a general range of typical values within the human digestive tract.

Natural products such as fish oil and peppermint oil are of benefit to the consumer when an enteric coating allows release in the intestine but, when consumed uncoated, these products would release in the stomach, possibly decreasing efficacy and causing unwanted effects on the upper GI tract. Some medication compounds can contain a casing layer that releases active ingredients immediately in the stomach, with an inner enteric coating, which delays release of the inner core, usually a different medication, until farther down the GI tract.4

Shellac is an example of a natural polymer used as an enteric coating. Derived from the resinous secretions of the Kerria lacca insect, as it goes through the pupa stage, this substance is water insoluble at low pH (acid) and water-soluble at higher pH (alkaline).8 You might have heard of products such as paint and varnish containing shellac but this substance is also a commonly used edible glaze for tablets and candy. Farmers even apply it to apples and other fruit to preserve them through the food supply chain.

Are all 5-ASAs coated the same?

5-ASAs (5-aminosalicylic acids) are a group of medicines commonly used to treat inflammatory bowel disease, such as Crohn’s disease and ulcerative colitis. They require specific coatings to reach precise affected locations in the GI tract for direct application to the intestinal mucosa. Otherwise, they are absorbed by the body overall, potentially resulting in an increased incidence of adverse drug reactions.5

Pentasa® (mesalamine) is one example of a 5-ASA, non-pH-dependant, granular enteric coated product. It is a pressed tablet containing a mixture of drug microspheres, which are coated with one, two, or three layers of ethylcellulose. After passing safely through the stomach, the one-layer granules release in the upper small intestine, the two-layer granules release later in the small intestine, and the triple-covered granules in the colon. The release of another 5-ASA product, Dipentum® (olsalazine), occurs in the large intestine, where colonic bacteria break down the non-pH-dependant enteric coating.

On the other hand, enteric coated Asacol® (mesalamine) is a pH-dependant 5-ASA product for ulcerative colitis treatment and maintenance remission. Its precise release at a pH of 7.0 or greater means that it stays protected throughout the GI tract until it reaches the terminal ileum, where the small and large intestines join, allowing for topical action throughout the colon. Complete dose delivery to the disease area is critical. Patients with moderately active ulcerative colitis treated with 4.8 g/day of mesalamine (800 mg tablet) are significantly more likely to achieve overall improvement, at 6 weeks, compared to patients treated with 2.4 g/day.6

This knowledge is important in choosing medications, particularly in instances when considering a generic version for treatment. Although a generic 5-ASA product attempts to mimic the pH release of Asacol®, studies demonstrate that the generic product releases at a pH of 5.5 or greater, which means the active ingredient could disperse at a non-disease site, and may not be of full benefit to disease located throughout the colon.7 There is no convincing evidence that a generic 5-ASA product has bioequivalence, therapeutic equivalence, and inter-changeability with brand products, which are designed to release in targeted locations within the GI tract.

While medications may seem similar, and your pharmacist assures you they are ‘the same’, he or she is actually telling you that the primary chemical entity is the same as in the brand product, however, the coating and some secondary components could well be quite different. This review of medication processing and targeting methods clearly illustrates these problematic differences. The above is just one example of why generic drugs don’t always deliver what brand drugs deliver. Following generic substitution, it might take a few weeks for adverse symptoms to appear and by then the disease activity within the colon could be difficult to subdue. Therefore, it is important for patients to discuss any potential medicine substitution at the pharmacy level with their physician in advance of filling their prescription.

Considering all the complexities involved in the coating of medications, it helps to know whether the medication you are using is reaching its intended location. Changing the product coat might lead to unintended consequences. Make sure your coat fits!