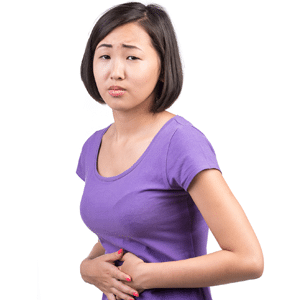 A peptic ulcer is a sore or break in the lining of any part within the digestive tract that contains concentrated gastric juice. The main components of gastric juice are water, mucus, hydrochloric acid, enzymes, and electrolytes. Ulcers most commonly occur in the first part of the small intestine below the stomach (duodenum), and can occur at the lower end of the esophagus or in the stomach.

Most ulcers result from infection with bacteria called Helicobacter pylori (H. pylori). Contrary to old beliefs, neither eating spicy food nor living a stressful life cause ulcers. H. pylori bacteria weaken the protective mucous coating of the esophagus, stomach, or duodenum, which then allows acid to get through to the sensitive lining beneath. Both acid and H. pylori irritate the lining and cause a sore (ulcer) to form.

It is unclear how these bacteria spread from person to person and why only a small percentage of those who have H. pylori within the stomach go on to develop peptic ulcers. Just because you have H. pylori bacteria populating your stomach does not mean you will get an ulcer, although most diagnosed with ulcers also have an H. pylori infection.

Another cause of ulcers is the regular use of pain medications called non-steroidal anti-inflammatory drugs (NSAIDs), which include aspirin and ibuprofen. Frequent or long-time use of NSAIDs, especially among the elderly population, can increase the risk of developing an ulcer.

About 10% of Canadians will experience peptic ulcers at some point throughout their lives.

The most common symptom of an ulcer is a burning pain in the upper abdomen, somewhere between the breastbone and the navel. The pain can last anywhere from a few minutes to several hours, often occurs between meals, and can awaken you from sleep. Food or antacids might temporarily relieve the discomfort. Less common symptoms of an ulcer include nausea, vomiting, lack of appetite, and weight loss.

There are three main complications of peptic ulcers: bleeding, perforation, and obstruction.

Bleeding may be the first and only symptom of an ulcer. Bleeding ulcers can cause vomiting of acidified blood that looks like ‘old coffee grounds’ and/or bowel movements that become tarry black. When an ulcer bleeds and continues to bleed without treatment, a person may become anemic and weak.

Perforation can occur when ulcers go untreated, as gastric juices can make a hole through (perforate) the stomach and/or duodenal lining, requiring surgery to close the opening.

Obstruction is a complication that can occur when chronic inflammation from the ulcer causes swelling and scarring. Over time, this scarring may close (obstruct) the outlet of the stomach, preventing the passage of food and causing vomiting and weight loss.

Surgery is required to repair obstructions. It is important to contact a physician immediately if your ulcer symptoms worsen.

The most common tests used to check for the presence of an ulcer are:

Upper GI series: X-rays are taken after the patient swallows a special liquid to coat the esophagus, stomach, and upper part of the small intestine.

Gastroscopy: A physician passes a long flexible tube with a tiny video camera on the end (endoscope) through the patient’s mouth and down the esophagus to the stomach to look for the presence of inflammation or ulcers. If necessary, the physician removes a small sample of tissue (biopsy) for further testing.

Tests for H. pylori: There are several tests available to detect Helicobacter pylori infection. These include a simple breath test, checking the blood for antibodies to the bacteria, or examination of stomach biopsies.

Physicians often recommend lifestyle and dietary changes for persons with ulcers in addition to medications, until complete healing occurs. Patients should avoid certain foods and beverages such as chocolate, coffee, alcohol, fatty foods, peppermint, citrus fruits and juices, tomato products, pepper, mustard, and vinegar during healing. Eating smaller meals that are more frequent may also control symptoms better. Smoking cessation is important, as smoking inhibits ulcer healing. You should also not take NSAIDs, such as aspirin or ibuprofen. Your physician will probably lift any dietary restrictions once your ulcers have healed.

The cause of your ulcer will determine the type of medical treatment that your physician recommends. If caused by NSAID use, then your doctor may discontinue prescribing NSAID medication, may suggest a different pain medication, or may continue NSAID use and add another medication to protect your stomach and duodenum, such as a proton pump inhibitor (PPI), which blocks stomach acid production.

If H. pylori infection is the cause of your ulcer, then your doctor may prescribe a treatment plan to kill the infection while reducing the acid in your stomach. Usually, this is a combination of one or more antibiotics (to kill the bacteria) plus a PPI. It is important to follow the treatment plan exactly as your doctor prescribes. This treatment can permanently cure 80-90% of peptic ulcers.

Some of the common antibiotic medications prescribed for treatment of ulcers caused by H. pylori infection include amoxicillin, clarithromycin, tetracycline, and metronidazole. It is important to take antibiotic prescriptions until they are complete. This helps prevent the growth of superbugs (more resistant bacteria) that might make subsequent infections more difficult to treat.

Acquiring H. pylori infection during childhood is common and individuals carry it throughout their lives, often without consequence. Transmission within a family is very rare and indiscriminate screening for H. pylori is unnecessary.

To help ensure that you remain ulcer-free, it is important to take all of your medication exactly as your physician prescribes, even if you begin to feel better part way through treatment. Re-infection after successful eradication of H. pylori is uncommon.