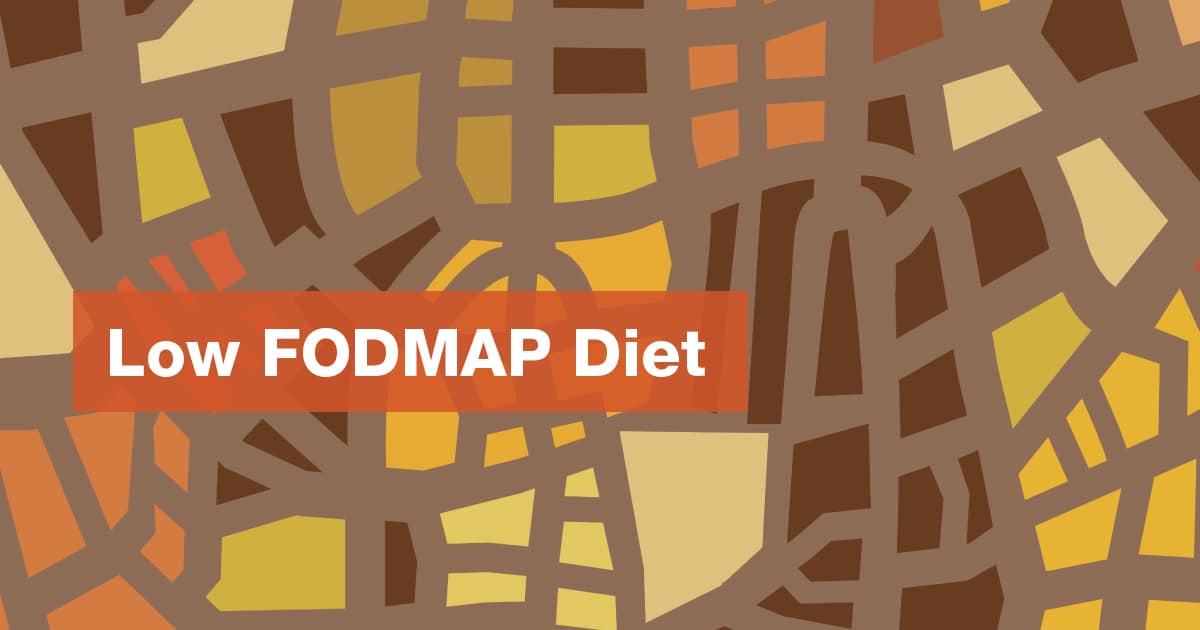 Irritable bowel syndrome (IBS) is the most common gastrointestinal condition worldwide, affecting an estimated 13-20% of Canadians. This often-debilitating functional disorder presents with symptoms of abdominal pain, bloating, and constipation and/or diarrhea. Patients’ symptoms can vary widely and there is no one-size-fits-all management approach for IBS. As a result, many people try to self-medicate, turning to sources on the internet – many of which scientific researchers have not verified – in a desperate attempt to find a treatment that might work.

A new proposed therapy for IBS, called the low FODMAP diet, is increasingly present on the web, even though there is still little research in support of its effectiveness. Individuals who have tried this approach have had mixed results. In this article, we will present the research-based facts and describe current limitations around the low FODMAP diet as a therapy for IBS. Anyone wanting to attempt this program should only do so in consultation with a registered dietitian who has specific training in IBS.

IBS can begin in childhood, adolescence, or adulthood and can resolve unexpectedly for periods throughout an individual’s lifespan, returning later in some cases. Despite its high prevalence, no one knows for certain what causes it. As potential origins of IBS, researchers are investigating the impact of physical and/or emotional stress on the gut, dietary issues such as food allergies or sensitivities, acute infection (such as traveller’s diarrhea), inflammation of the intestine, and neurological hypersensitivity within the gastrointestinal tract, to name a few. Research has shown, for example, that individuals with IBS tend to experience pain in their internal organs in response to mild or normal stimuli, such as bloating (visceral hypersensitivity).1

IBS treatment often includes diet and lifestyle modifications, fibre supplements, probiotics, and medications (antispasmodics, laxatives, antidepressants). Patients must take an individualized approach to dietary therapy because there is no one food or food group proven to trigger IBS symptoms in all patients and no one treatment that works in every person.

Sue Shepherd, an Australian PhD dietitian/nutritionist, and her colleagues, developed a novel dietary management approach that they say reduces IBS symptoms for many of their patients, which they call the low FODMAP diet, which stands for Fermentable Oligo-, Di-, and Mono-saccharides, And Polyols, represented as:

The premise is that foods fermenting in the gut leads to uncomfortable side effects that mimic or magnify IBS symptoms. Some foods ferment more easily than do others. The technical names, above, represent various types of short-chain carbohydrates and sugar alcohols found in many foods we eat (see table) that rapidly ferment.

During the digestion process, our bodies physically and chemically break food down into simpler forms, so it is easier for us to absorb the nutrients but, despite our best digestive efforts, many of these carbohydrates remain poorly absorbed in the small intestine.1 In most individuals, these unabsorbed food residues don’t trigger any unfavourable symptoms.

Shepherd and her colleagues contend that in some IBS patients, FODMAP-containing foods might trigger bloating and diarrhea, and that when limiting overall consumption of all FODMAPs, or only specific ones, these symptoms seem to lessen. They suggest that while all of the types of FODMAPs seem to worsen bloating and diarrhea, their mechanisms of action in the body vary from one FODMAP to the other. Here are the differences they noted:

In general, FODMAPs are part of a nutritious diet and healthy individuals should continue to enjoy their benefits. Milk and dairy products are great sources of calcium, which helps build strong bones and ward off osteoporosis. Fruits and veggies contribute to our daily fibre intake and are full of vitamins and minerals. Legumes are a great source of protein, especially important in a vegetarian’s diet. Oligo-saccharides, such as onions and garlic, also selectively promote the growth of beneficial bacteria in the colon, which then discourages growth of harmful bacteria such as C. difficile and E. coli.

For these reasons, and others, you should not embark on the journey to lower FODMAPs in your diet unless you and your healthcare team believe it is a necessary step in your treatment plan and you have made the appropriate complex dietary adjustments to include nutritious foods that can provide nourishment similar to what FODMAPs provide.

FODMAPs do not cause IBS, but limiting their intake might provide an opportunity for management of symptoms in some patients. The low FODMAP diet begins with the elimination of all FODMAPs for 6-12 weeks, followed by gradual reintroduction until patients reach a tolerable intake. Ideally, IBS symptoms will improve during the restriction period and be maintainable as patients slowly reintroduce limited amounts back into their diets. If symptoms do not improve during the elimination trial, then there is no point to continue on this diet. Even Shepherd notes, “For some people a change in the food they eat may help their IBS, whilst for others it will make no difference.”3

To be sure that you still meet your daily nutritional requirements, it is always important to seek professional advice before you eliminate or restrict everyday foods from your diet. FODMAPs occur naturally in many foods and are common additives in packaged foods and medications, making it very difficult for the average person to detect and avoid them entirely without professional advice.

Australia has been the hub for the majority of studies investigating the reduction of FODMAP intake and its effect on IBS symptoms, with Shepherd co-authoring many of the studies. Although research is still at the experimental stage and some of it is contradictory, the results do show some promise. A small British study compared the clinical effectiveness of the low FODMAP diet with the standard NICE (UK’s National Institute for Health and Clinical Excellence) guidelines for IBS dietary therapy.

The NICE guidelines cover both general dietary advice (e.g., regular meal pattern, adjusting fibre intake, reducing caffeine) and symptom-specific dietary advice for flatulence, bloating, diarrhea, and constipation.4 The nine-month evaluation consisted of only 82 adult IBS patients, 39 in the standard NICE group and 43 in the low FODMAP group. All participants had a consultation with a dietitian and received take-home materials specific to their assigned group. At follow-up, participating patients completed a questionnaire in which they rated symptom changes. When the researchers combined all symptoms into a composite score, more patients in the low FODMAP diet group (86%) had an improved score compared to the standard NICE group (49%).

Interestingly, there was no significant difference in the proportion of patients reporting improvement in constipation between the two groups. In total, 32 out of 42 patients in the low FODMAP group reported satisfaction with their symptom response compared to 20 out of 37 patients in the standard NICE group. The researchers asked a subgroup of patients how much time it took for their symptoms to resolve and the mean time for individuals in this group was 3.5 weeks.

The results of studies conducted on the low FODMAP diet suggest its promise as a possible management approach for IBS symptoms, particularly for patients who have diarrhea-predominant IBS. However, further research is required, specifically on how the dietary modifications will fare in North America. Shepherd and other researchers in Australia have been developing this diet since 2001, including the creation of Safe Food Lists, which clarify what foods patients trying to follow this diet can consume safely.

Although many foods on these lists are also available in Canada, other safe foods that are common to our diet are nonexistent in Australia, which diminishes the value of these lists for Canadian use. As experts in Canada and other countries test and review the safety and efficacy of the low FODMAP diet, it is best to follow the advice of your healthcare team to manage your IBS symptoms.

Anyone wanting to attempt this program should only do so in consultation with a registered dietitian who has specific training in IBS.

First published in the Inside Tract® newsletter issue 184 – 2012