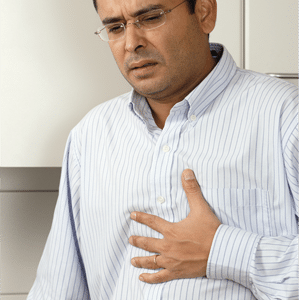 Hiatus hernia is a common condition of the upper digestive system, especially in individuals with a chronic sensory and peristalsis problem of the digestive tract (functional dyspepsia).

It is helpful to learn normal anatomy to understand the abnormal changes that produce hiatus hernia. The diaphragm is a thin, flat, predominantly horizontal muscle separating the chest from the abdomen at the bottom of the rib cage. It regulates respiration by moving up and down. For any structure to pass through the diaphragm there must be an opening, referred to as a hiatus.

A muscular tube (esophagus) propels food from the mouth to the stomach with regular contractions. It runs through the chest, behind the lungs and heart, and through the tight esophageal hiatus in the diaphragm before reaching the stomach.

When working properly, the hiatus is reasonably tight and firmly grips the esophagus just above the stomach. The esophagus wall is at its thickest at this point and a muscle here contracts to seal off the stomach, forming the lower esophageal sphincter (LES). After swallowing, the LES opens, allowing food passage through to the stomach, and then usually closes quickly and remains in a closed position, which prevents food or acid within the stomach from refluxing back up into the esophagus.

In some individuals, the opening in the diaphragm becomes wider than usual, allowing the esophagus to slip out of its normal position, and permitting part of the upper stomach to displace upward through the enlarged opening, producing a hiatus hernia. In about 95% of cases, a portion of stomach regularly moves up and down through the hiatus, producing a sliding hiatus hernia.

While the precise cause of hiatus hernia is unclear, pressure within the abdominal cavity could be a contributing factor. Therefore, your physician might ask you if you have recently had periods of frequent intense coughing or sneezing, severe vomiting, straining from constipation, or frequent heavy lifting or bending over. Other potential risk factors for developing a hiatus hernia are pregnancy and obesity, where in some individuals, there is extra intra-abdominal pressure.

The most common symptom of hiatus hernia is heartburn, the burning discomfort produced in the lower central chest by refluxing stomach acid irritating the lower esophagus, which lacks the protective mucous lining of the stomach. Other symptoms, which vary from person to person, can include:

The symptoms can be similar to those experienced by individuals with gastroesophageal reflux disease (GERD). Coughing is often a result of irritation to the throat, which may also trigger a spasm in the esophagus with more severe, extensive chest pain. Many with hiatus hernia have no symptoms or perhaps only a few symptoms, which generally arise during activities that increase pressure against the diaphragm, such as lying down or bending.

Testing will likely be required to confirm the diagnosis of hiatus hernia, and to rule out other possible reasons for the symptoms. These tests can include an upper GI series or a gastroscopy. The upper GI series consists of the patient drinking a liquid that coats the walls of the esophagus and stomach. This drink contains barium, which shows up as bright white on X-rays, providing a contrasting picture of the shape and function of the upper GI tract during the X-ray. During a gastroscopy, the physician inserts a hollow, flexible tube with a tiny light and video camera into the patient’s body via the mouth, to allow for a close-up view of the esophagus and stomach.

As with many digestive conditions, there are a number of components to a hiatus hernia treatment plan. These could include dietary and lifestyle modifications, medications, and possibly surgery.

The first aim of treatment is to prevent the refluxing of acid into the esophagus. Physicians recommend lifestyle and dietary changes for those with hiatus hernia and suggest eliminating or limiting foods that cause discomfort. As with symptoms, irritating foods vary among individuals. Consuming small, more frequent meals lessens the degree of stomach distension, thus decreasing upward pressure. Squatting, rather than bending, maintaining average weight, and elevating the head of the bed by about six inches while sleeping, all serve to decrease pressure on the diaphragm. Smoking cessation is also important for reducing hiatus hernia symptoms, as studies point to relaxation of the LES with smoking. Patients should avoid lying down right after eating and refrain from eating within two to three hours of bedtime.

The second aim of treatment is to reduce stomach acid so that the contents are less irritating if reflux does occur. Do this by avoiding long periods without food in the stomach; avoiding substances that stimulate acid secretion, such as aspirin and alcohol; and by taking appropriate medication.

There are two main approaches to treating hiatus hernia with medications: neutralizing acid and blocking its production.

For neutralizing acid, over-the-counter medications such as Maalox®, Tums®, and Pepto-Bismol® may subdue symptoms. Another product, Gaviscon®, neutralizes stomach acid and forms a barrier to block acid rising into the esophagus. Some find that these non-prescription antacids provide quick, temporary, or partial relief but they do not prevent heartburn. Consult your physician if you are using antacids for more than three weeks.

All of the medications discussed above have specific treatment regimens, which you must follow closely for maximum effect. Usually, a combination of these measures can successfully control the symptoms of acid reflux.

Some other medications and/or supplements may aggravate acid production. Be sure to ask your pharmacist or physician if any products you are currently taking could be affecting your symptoms.

In some cases, your physician might recommend surgery, such as fundoplication, in which the physician wraps part of the upper stomach around the lower esophagus to tighten the opening. Unfortunately, surgery does not always resolve the problem.