How Do You Define Normal?

In February of 2005, the Canadian Society of Intestinal Research held two Bad Gut Lectures in British Columbia regarding Crohn’s Disease, Including New Treatment Options. We asked attendees with Crohn’s disease to complete a questionnaire. Details of the participants:

We asked people to tell us about their experiences with Crohn’s disease and then linked this to the level of control they felt they had over the disease by their response to the following survey question: “On a scale of 1 to 10, rate the level of control you feel you have over your Crohn’s disease: (Where ‘no control’ = 1 and ‘complete control’ = 10)”.

The experience of Crohn’s disease varies on a patient-by-patient basis. Some people may experience very little disease or symptom activity while others require frequent hospital stays.

Patients surveyed missed an average of 35.1 days from work in the past year, missed 13.5 days of social/family time, had at least one visit to the hospital emergency room, and were hospitalized an average of 2.9 days.

It is up to you and your physician to decide what is normal for you. With the continued development of new medications, it will be important in the coming years for Crohn’s disease patients to educate themselves on the risks and benefits of new treatment strategies. This might help shift what is an acceptable “normal” or “control” to a more comfortable level.

At the Gi Society, we are committed to keeping you informed about new developments in the treatment of Crohn’s disease. Subscribing to the GI Society’s newsletter, The Inside Tract®, is one step in the journey towards taking control of your disease.

A striking gap in this patient survey was the fact that 69% of respondents who were taking corticosteroids had never undergone a bone density test. 20% of the respondents were on steroids for longer than 4 months. The average for all respondents was 5 months. In view of the high correlation between corticosteroid usage and osteoporosis, patients taking these medications are encouraged to discuss their bone health with their doctors.

Twenty percent of patients surveyed were current smokers. Research shows that current and former smokers have a higher risk of developing Crohn’s disease than non-smokers do. Among people with the disease, smoking is associated with a higher rate of relapse, repeat surgery, and immunosuppressive treatment. In all areas, whether current or former smokers, the risk is greater for women than for men.

Only 5% of patients surveyed used a daily diary. It might benefit patients to keep a daily diary showing the range of experiences with stomach/abdominal cramping and stool consistency. The diary also serves as a record of times when work or a social function is missed due to symptoms of the disease, or when a visit to the emergency room or a hospital stay is required. Many people find it difficult to remember this kind of information over time. Since doctors look for patterns in disease activity when evaluating a patient, the daily diary could prove to be a useful tool. In addition, if symptoms progressively worsen, then you could alert your physician sooner, who could then provide intervening care that might potentially avoid a trip to the hospital emergency room.

Taking control of Crohn’s disease for you could be as simple as making entries in a daily diary of your symptoms and taking this information to your next visit with your doctor. 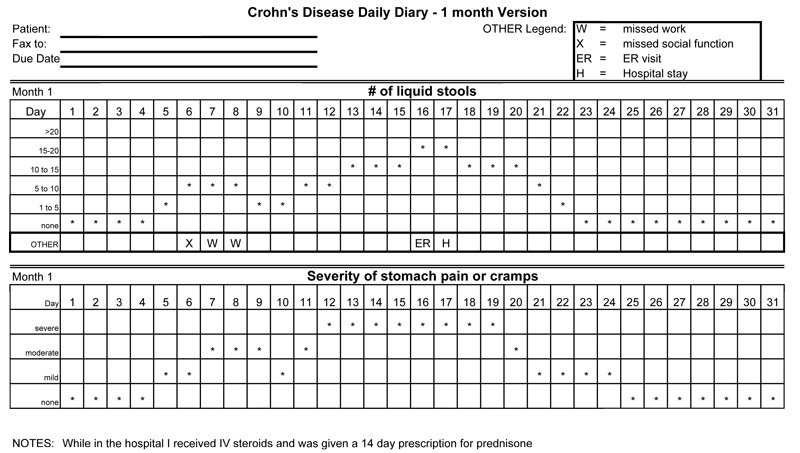 Our survey showed that people with Crohn’s disease were on an array of medications, and some were on more than one. This included 71% on 5-ASA, 47% on corticosteroids, 32% on immunosuppressants, 9% on biologics, with 14% of the people also taking other medications to manage the disease.

The more you get involved in understanding Crohn’s disease, the more you may eventually improve what you define as normal. Keep in mind that The GI Society has printed information on Crohn’s disease, holds public forums from time to time, and offers support groups for persons with this disease.