Cinnamon: The Good, the Bad, and the Tasty 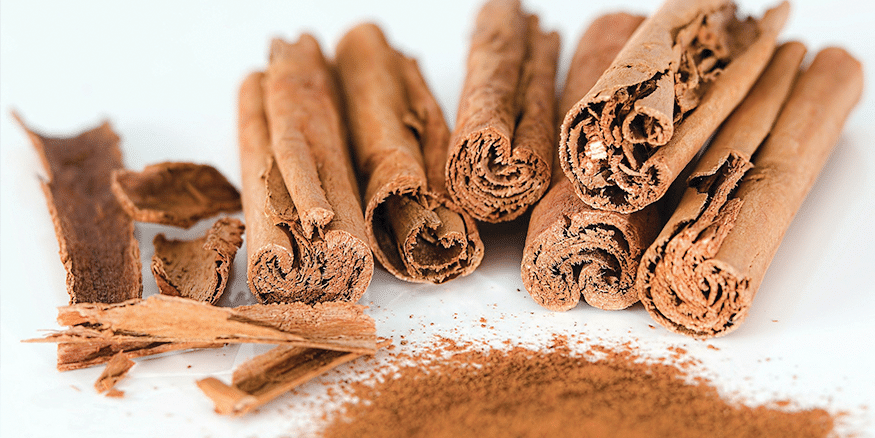 Cinnamon: The Good, the Bad, and the Tasty

This common spice is a mainstay of most kitchens. Delicious in sweet treats and hearty oatmeal, and a unique twist in savoury meals, cinnamon has a warm, slightly spicy taste that lends well to a variety of dishes. You might have even heard that it can help balance blood sugar in those with type 2 diabetes or ward off Alzheimer’s disease. However, the story of cinnamon is a bit more complex, and it is potentially dangerous.

There are many types of cinnamon, all of which come from the inner bark of several species of evergreen trees in the Cinnamomum genus. However, there are two varieties that you will most likely find commercially available for use in food products: Cassia and Ceylon. 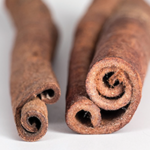 The most common type in Canada currently, and the one typically labelled as just ‘cinnamon’ in grocery stores, is Cinnamomum cassia, or Cassia cinnamon. It has a strong, rich, slightly bitter flavour that makes it an ideal choice for heavier baked goods and tends to be quite inexpensive. You might also come across Saigon or Korintje cinnamon, both of which are varieties of Cassia cinnamon. 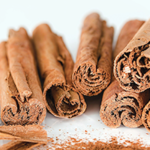 Cinnamomum verum, also called true cinnamon or Ceylon cinnamon, is a more expensive and difficult to find cinnamon variety. Ceylon has a lighter, sweeter flavour than Cassia. Historically, Ceylon was more common in Europe and North America, but changing trade systems have shifted favour to Cassia cinnamon. Most traditional recipes from Europe and Mexico that call for cinnamon use Ceylon cinnamon, and require this type for an authentic flavour.

It is difficult to tell the difference between Cassia and Ceylon cinnamon visually when they are in powder form, but the cinnamon sticks look quite different. Cassia cinnamon sticks are one thick, firm layer of bark, rolled up, whereas Ceylon is several thin, soft layers of bark rolled together. Ceylon cinnamon also tends to be lighter in colour than Cassia.

Cinnamon contains many compounds that potentially have a positive effect on health, including polyphenols, antioxidants, and some unique chemicals such as cinnamaldehyde, cinnamic acid, cinnamate.1

Studies have found that cinnamon might help balance blood sugar in those with type 2 diabetes by increasing glucose uptake, improving insulin sensitivity in fat and muscle tissues, improving glycogen synthesis in the liver, slowing the rate of gastric emptying, and other potential changes.2 These effects are the result of cinnamaldehyde, a compound in all cinnamon varieties. While the research shows some benefit for glucose control, it is still important for those who have diabetes to follow the treatment plan outlined by their physician, as the effects of cinnamon in studies so far do not show adequate changes to be a replacement for medication.3

Cinnamon contains antioxidants, which are a healthy component of the diet that help neutralize free radicals, preventing them from damaging cells in the body.4 Cinnamaldehyde also has some antibacterial properties and might slow down the growth of cancerous cells.4

Overall, the vast majority of research on cinnamon shows a plethora of benefits, and studies are continuing to be published that provide further evidence. Compounds in cinnamon might help prevent Alzheimer’s disease, decrease inflammation in arthritis, and limit the hardening of artery walls (arteriosclerosis).1

While this spice has many favourable aspects, there is a downside to most types of cinnamon: coumarin.

Coumarin is a chemical compound found in several plants, including cinnamon, that can cause liver damage in large doses. However, coumarin is not present in Ceylon cinnamon, which means it has the wonderful benefits of cinnamon without this drawback.

Some countries in Europe set a tolerable daily intake for coumarin. In Germany, this number is 0.1 mg per kg of body weight.5 One study analyzed several Cassia cinnamon products and found coumarin content between 2,650 and 7,017 mg/kg.6 They also tested a sample of Ceylon cinnamon, which had only negligible amounts of coumarin, making it a safe alternative to Cassia varieties. An average teaspoon of cinnamon weighs about 2.6 g, which means that each teaspoon of a non-Ceylon cinnamon contains 6.9-18 mg of coumarin. At these levels, a single teaspoon per day could put many average sized adults at risk of liver damage. This is especially true for individuals who already have pre-existing liver disease.

Parents should also be careful, because a small child could ingest too much coumarin from consuming a relatively minor quantity of Cassia cinnamon. For example, an 18 kg, 5-year-old child would only need to consume 1.8 mg of coumarin, which could be found in a small portion of a cinnamon baked good. While this is safe if it happens occasionally, regularly serving your child food with cinnamon could be dangerous.

Early studies in rodents found that coumarin could lead to cancerous tumours. However, there are no indications that this is true for humans, because of differences in the ways the two species metabolize coumarin.7 While liver damage is a serious concern, there is no evidence that coumarin is carcinogenic to humans. It might even help prevent the development of certain cancers, as mentioned in the health benefits earlier.

One of the ways that cinnamon helps control blood sugar levels in those with diabetes is by delaying gastric emptying. Since gastroparesis patients experience very delayed gastric emptying, which leads to negative health consequences, these individuals might want to limit their cinnamon consumption.

Do You Need to Worry?

Cinnamon is a common, enjoyable spice with a wide range of health benefits, but remember that it is not an adequate replacement for medications or proper treatments. In addition, the coumarin content of some species has the potential to cause liver damage. While occasional use in foods is safe for most individuals, consuming large amounts of Cassia cinnamon or taking supplements with this ingredient might be dangerous, especially for children and smaller adults, as well as for individuals who already have liver disease or gastroparesis. If you use large amounts of cinnamon, then you should consider reducing your intake or switching to Ceylon cinnamon to avoid the risk of liver damage.

First published in the Inside Tract® newsletter issue 202 – 2017