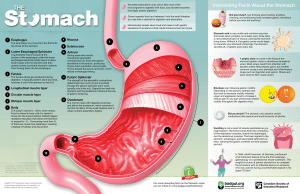 The stomach is a J-shaped organ that lies between the esophagus and the small intestine. It has three main functions:

The esophagus is a muscular tube that links the throat to the stomach.

A specialized ring of muscle at the bottom of the esophagus called the lower esophageal sphincter (LES) opens to allow food to pass into the stomach and then quickly closes to prevent stomach contents from flowing back into the esophagus.

The fundus stores gas produced during digestion. It typically doesn’t store any food; however, it can if the stomach is very full.

The body’s volume is ~50mL when empty. Food is stored in here until it is ready to move into the small intestine. Eating triggers receptive relaxation that allows the stomach to expand to ~1L. Consuming more than 1L of food can cause over-distension, creating a feeling of fullness and discomfort.

The strength of the peristaltic contractions determines how much chyme is pushed through the pyloric sphincter each cycle (usually only a few mL). Signals from both the stomach and the duodenum influence the rate of gastric emptying.

The chyme mixes with digestive enzymes and bile in the duodenum, which consists of the first 25-38cm of the small intestine and is where nutrient absorption begins.

Interesting Facts About the Stomach:

Want to learn more about the stomach and digestion?